Experience As A Teacher 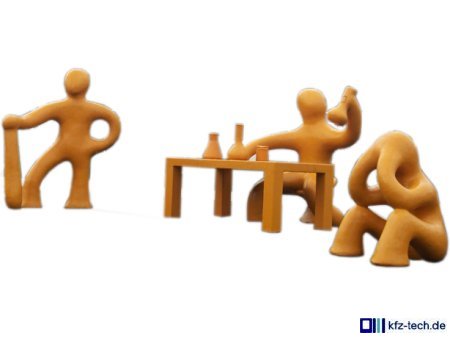 One day, in the staff room, one finds a note on the pin-board where someone has really run off at the mouth about 'the youth of today'. They are lazy, their abilities are extremly limited and yet, they're very sure of themselves. The first reaction is, one tends to agree. In this case, someone who has been through the mill, is pouring his heart out. However, when one has a look at the signature, one sees that this citation is more than 2000 years old.

Apparently this was always the case, that the older generation complained about younger people and couldn't believe, that the youth would, one day, be able to take over their, until then, well organised world. At the end of the day, this sceptism has proved, over and over again, to be unjustified, either because the young people have grown with their responsibilities and duties, or because the older generation have simply underestimated them or they have chosen to forget or ignore the sins of their own youth.

Nevertheless, it may be interesting, after nearly 40 years of trade-school teaching, to compare the youth of today with those from times gone by. Thereby, it must be said, that the differences between those in growing up in rural areas, are without a doubt, greater than those in urban areas. One could also say, that the differences have become closer to each other than they were before.

If I think back, about how uncommunicative the majority of those who chose the occupation of motor-mechanic were, how difficult it was to get them going, or to get them to open themselves up, and that with up to 8 hours of lessons on the trott and in the same classroom. A great deal of silent-work (without teacher intervention) was the order of the day, with more applied mathematics and much more technical draughtsmanship than today. One was even happy, if their hands were fairly clean at the time.

Support utilities for the teacher: well yes, there was the spirit-carbon duplicator with a hand-crank and the paper sheets smelling of spirits. Using two or more matrices and as many run-throughs, even colour copying was possible. It goes without saying, that one also qualified oneself as a projectionist for 16-mm film projectors, indeed, the showing of these films was not always accident-free. At least when the film snapped, one could generally take care of it oneself.

One probably did have more peace and quiet to read something out or to have it read out. Somehow, one had more time, if I look back, it seems to me that there was less hustle-and bustle. Mostly, one guided all the apprentices who had survived the trial period, up to the journeymans examination, There may have been a few who, because of serious accidents, e.g., with a motorcycle, could no longer work in the trade. Nowadays, one often has to make do with as little as half the team.

There were less conflicts than there are today, however, if I remember correctly, these were fought out more vehemently. Physical violence, even during lessons, was possible. Those who weren't that good with words, often resorted to actions. I sometimes miss the reliability of those times. If, in those days, something was said, it was generally stuck to. The class and the teacher stuck together more than the individual and the teacher. That one 'told tales' on the other, has only, in the course of time, crept into school-life. The 'class-basher' took care of that.

OK, it is said that todays apprentices don't have as good a foundation. This may be the case with mathematics and particularly with mental arithmetic, hoever, 'valv(e)s' and 'machee(ine)n' were spelled incorrectly then as well. What is new, is the pride taken in incorrect spelling, the slogan is: 'if you find an error, you can keep it.' Apart from that, the handwriting is less readable than before. Sometimes one needs a graphologist to decipher the name, we won't even speak of those who sign their tests with 'Sascha S.'

Indeed my handwriting has also suffered. All one does nowadays, is type. Sending an SMS is not helping your handwriting skills at all. This brings us to the next subject. Apart from being more eloquent, the mastering of computers has improved enormously. I still remember how difficult it was to get the somewhat sluggish 'motor-mac' used to the keyboard. A number of them couldn't even imagine what this trade could possibly have to do with computers.

In my assessment, the biggest single advantage that the youth of today has, is the possibility of networking. There is hardly a problem which cannot be solved by working together, even if it is a simple task like percentage calculation. Certainly, sometimes the result is wrong, because maths does not work on the principle of the majority voting system, all in all however, this seems to me, to be the more sensible way of coping with the future.

I am not in a position to be accompanied by a cell-phone the whole day. However, I've been -particularly as a teacher - trained to be a lone-wolf. This gives me more staying power, but sometimes prevents me from being able to see more simple solutions. Indeed, while we're comparing, after finishing my studies, I had a relatively good chance of finding a job, and never had to search through the endless situations offered columns. Who can blame todays young people for using every free moment for relaxation? Who can tell what still lies ahead of them?

What I do find disconcerting in these fast-moving times, are certain excesses. In those days there were also alcohol and drugs, but they weren't 'enjoyed' quite as extensively as today. Apart from which, the concentrations found in e.g., Cannabis at that time, cannot be compared with todays product. Binge drinking, regular, at least in Germany, fights with Turkish- or Russian born Germans and the glorification of the Nazi-period frighten me ... 09/09